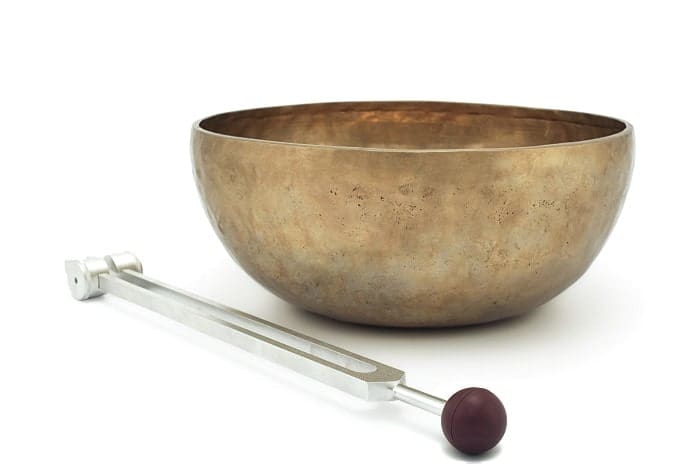 As we get increasingly overwhelmed by the complexities of life, finding the much-needed stability and clarity becomes all the more important, and that’s exactly what the Root Chakra, the first of the 7 epicenters of energy, provides to us.

This is one of the three chakras of matter and provides a firm grounding factor to your life. Chakras are closely intertwined with the physical self, the spiritual being, and the harmonious notes of a traditional Tibetan singing bowl.

If you’re a beginner in the art of chakra cleansing, aligning your root chakra with the best root chakra singing bowl might be the ideal path to choose.

Before we delve into out detailed reviews, here’s our choice for the best root chakra singing bowls at a glance:

A lovely translucent white crystal singing bowl from TOPFUND, it is prepared with 99.9% pure crushed quartz and especially tuned at note ‘C’ for the cleansing of root chakra. The 8-inch bowl produces a deep, calming sound when played with the rubber mallet that comes with it. It also comes with a heavy-duty bowl case, a suede-textured bowl bundle, and a 7-mm O-ring.

CVNC, a renowned crystal bowl brand, brings this 8-inch frosted quartz crystal singing bowl for root chakra balancing as it is tuned to a prominent note C and sings with a rich lasting sound. The bowl comes with a mallet and an O-ring.

A product which is as visually appealing as it is audibly pleasing, this 8-inch quartz crystal singing bowl is hued in rose-pink and tuned at a frequency of 440 Hz and a prominent note C. It comes with a mallet and a base-ring and produces a lasting, resonating sound. 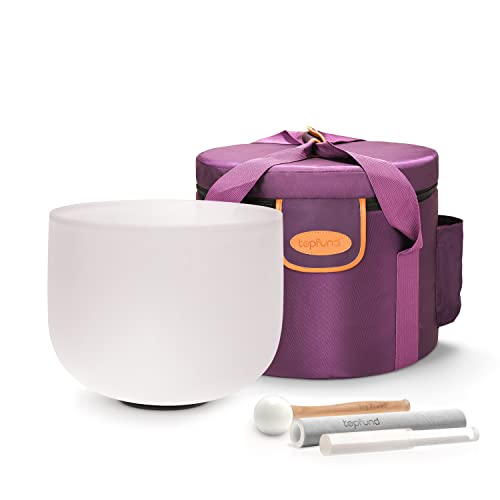 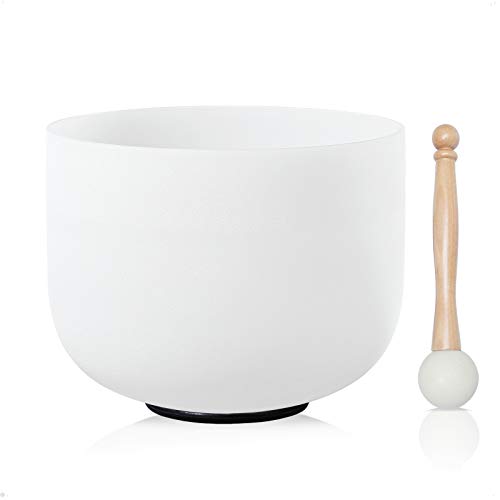 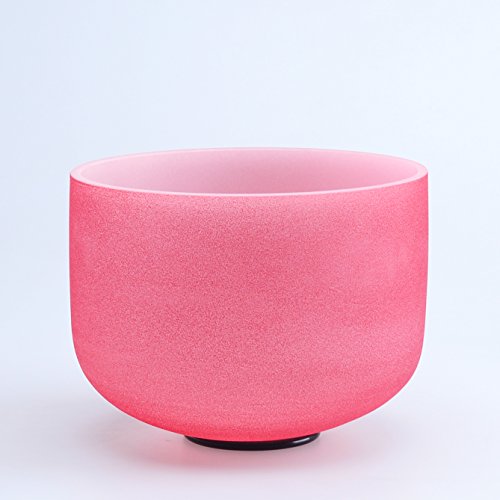 What is Root Chakra?

Among the seven chakras or the core energy centers in a human body, the root chakra is the most fundamental. It is also called Muladhara in Sanskrit. Mula means ‘root’ and adhara means ‘support’.

Thus, this chakra is primarily concerned with everything that keeps us grounded: survival instincts, sense of security, safety and stability, emotional strength and confidence, humility, sense of belonging, and connection to mother Earth. It also plays a vital role in a person’s fight-or-flight response.

Where is the Root Chakra?

The Root chakra forms the foundation of the seven chakras aligned throughout a human body from the crown of the head to the bottom of the back. As the name indicates, the root chakra is situated at the base of the spinal column. It physical corresponds to the perineum, along the initial three vertebrae, at the pelvic floor.

The physical significance of the root chakra makes it closely associated with the lower half of the body, which includes lower back, kidneys, bladder, and genitals. Moreover, the spiritual energy is considered to stay coiled and dormant at this location, until the root chakra is opened, and the energy gets released to the other chakras.

Spiritual imbalances and blockages are directly related to the physical and psychological wellbeing. A troubled childhood, familial issues, underlying fear, and past traumas might be some possible causes of blockages or imbalances in the root chakra, leading to a number of physical and emotional disruptions.

Balancing the root chakra is crucial to maintain a sound physical health. Root chakra imbalances may cause issues related to digestive system like irritable bowel syndrome, the colon, the bladder, the lower back, and legs.

Men would especially experience prostate problems. A person going through eating disorders, such as obesity or problematic weight loss, is likely to have a root chakra imbalance. A weak immune system, abnormal libido, and anemia are all signs that indicate problems with the root chakra.

A person with an imbalanced root chakra might experience anxiety, phobia, emotional distress, nightmares, and a sense of lack of safety. Someone with a hyperactive root chakra might show aggressive behavior, control issues, resistance to change or progress, greediness, arrogance, and dominance.

On the other hand, an underactive root chakra could leave one with a wreck of a social life, lack of concentration and organization, troubled decision making, fear of judgement, and anxiety of not being good enough.

Since the root chakra is all about understanding the meaning of existence and the phenomenon of “I am”, an imbalance may cause people to question their own existence. The person would fail to keep a strong hold on his/her faith and self. Balancing the root chakra would not just help one have confidence in himself but also find purpose in life.

How to Open Root Chakra with A Singing Bowl?

Learning how to open root chakra is simple yet quite effective. It would help you counter the physical and emotional symptoms of chakra imbalance and help you achieve a sense of relaxation and self-confidence.

The Root chakra can get easily misaligned in a fearful or unreliable situation. Using a singing bowl in your everyday meditation routine is one of the most useful technique in opening the root chakra.

Singing bowls are instruments used sound baths due to the efficacy of the healing vibrations. Meditating with the resonant chakra frequency sounds would bring it into balance and the vibrations from the root chakra singing owls would result in a synchronistic harmony.

Choose a singing bowl with the lowest frequency for the root chakra, usually around 432 Hz. It corresponds to the note ‘C’ and mantra chant LAM.

Made from 99.9% pure crushed quartz crystal, these bowls have the ability to enhance your experience in meditation, yoga and similar activities. Tuned to perfection with a prominent ‘C’ note and the 4th octave, the bowl produces a sound that resonates and fills your house with positive energy.

TOPFUND come with a suede texture bundle for singing bowl and a heavy-duty bowl case which can be zipped up to keep them well-protected and free from impurities. The crystal bowl is also accompanied with a mallet and a 7mm O-ring that serves the same purpose as the root chakra serves in our body: providing stability.

The professional and beautiful packaging make them an ideal product to be gifted to a loved one which seems to be manifesting signs of root chakra imbalance.

It would be a great addition to your set of singing bowls. Ideal for everyday meditation routine.

This 8-inch CVNC crystal singing bowl is designed to let you enjoy the soothing, harmonious sound and bring positive changes in your physical and spiritual self. This singing bowl meant for root chakra meditation is made with the purest quality of crystal.

Adorned with a frosted quartz appearance, this bowl would serve as a beautiful decoration piece to complement your house décor. The free mallet that comes with these bowls has proven useful in producing sound waves which activate the root chakra and therefore these bowls are most famously used in yoga, meditation, praying rituals. The wooden mallet with a rubber ball comes with the bowl.

The singing bowl is tuned to create a C note sound at a frequency of 440 Hz. A high-quality rubber O-ring with a thickness of 7mm is provided so that one can play if with a sturdy base. These bowls are designed to pick up sound quickly and hold the tone for a long time, which is a most-wanted feature in any singing bowl.

Hailing from China, Donghai Quartz is a brand that offers a range of superior-quality root chakra singing bowl collection. Hued in the aesthetically pleasing rose-pink color, these singing bowls have a beautiful and exquisite appearance, which would make them stand out on your shelf of meditation accessories.

The color is intentionally chosen as pink signifies energy of determination, commitment and aids in meditation and reflection. The quality and purity of crystal used in these bowls is exemplary. Whether you are at home, in a yoga studio or travelling, this 8-inch bowl could easily accompany you in all your ventures.

The singing bowl is perfectly tuned to note C and the ideal frequency of 440 Hz for root chakra. Playing it with the accompanying mallet would allow you to create mellow sounds and activate and energize the root chakra. The delicate singing bowl comes with a base ring to provide stability when played.

It is an ideal product for root chakra meditation for beginners as well as experts who play multiple bowls simultaneously.

AMSUNBO takes pride in adding quality to the life of its customers through its serene Crystal C Note Root Chakra singing bowl. Made with 99.9% quartz, the 10-inch bowls produce a sound in 4th octave that uplifts your spirit by creating a strong positive energy around you.

The translucent white frosted look of these bowls is simple yet gorgeous. These bowls would serve as spectacular decorative pieces as well as therapeutic musical instruments. It comes with a free-of-cost suede striker. The high quality of crystal used in these bowls make them strong in creating sounds for a longer time.

AMSUNBO can be a perfect gift for your ambitious yoga friends, meditation teachers, healers, family members as they give quick results in calming high stress levels. These bowls are 10 inch in diameter and create soothing C-note sounds for root chakra balancing. The thick O-ring is provided to ensure a sturdy base for these bowls.

You can play it in private meditation sessions as well as yoga classes to add the factor of “grounding” associated with root chakra.

Q: Is there a specific diet which might be beneficial for the root chakra?

A healthy diet is the key to keeping all chakras balanced. However, the root chakra derives most benefits from the root vegetables and food rich in protein. Adding parsnips, potatoes, onions, garlic, beets, carrots, turnips, ginger, radishes, fennel, and turmeric to your diet would be highly beneficial. You may also add meats, eggs, beans, and nuts.

Q: What does the color and symbol of the root chakra signify?

The root chakra is represented with the rich vermilion red color, which signifies strength, vitality, and stimulation of instinctual tendencies. The symbol is a circle with four petals (four-petaled lotus) and a downward-pointing triangle, signifying its connection with matter, and grounded and earthly nature.

The importance of aligning and cleansing the root chakra cannot be overemphasized. Using sound therapy with the best root chakra singing bowl has proven to be quite beneficial in this regard.

Out of our top recommendations, I would pronounce the rose-hued, 440HZ 8″ C Root Chakra Quartz Crystal Singing Bowl from Donghai Quartz a hot favorite, owing to its appearance, long-lasting harmonious vibrations, and excellent crystal quality.