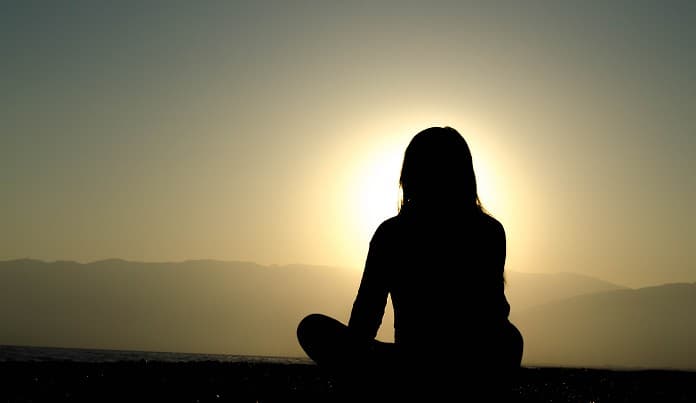 These visions occur where your meditation practice is somewhere between sleep and wakefulness. Your subconscious mind plays a vital role in the visions you see during meditations.

As a meditation practitioner, it is imperative to know the types of meditation visions and their meaning as well as why and how they occur.

There are many meditation visions and their meanings, however, there are three main types.

It can be a light, color or even symbol (or shape). The vision that you see has its roots in the spirituality of your mind at that time.

Sometimes you see a mix of things. It is important to note that clustered images mean nothing but a distraction of thoughts during meditation.

Visions of Light During Meditation and their Meanings

According to spiritual experiences by Swami Vivekananda, you will visualize different lights during your meditation journey.

It happens many times that a meditator experiences flashes of light or lights in particular shapes. Sometimes you may think that it can cause stress to your eyes.

However, that is not the case here.

They can reduce your concentration. You should not get distracted and focus on the practice. It often happens when you are close to your spiritual self, and at that time, you come across visions during meditation.

There can be different kinds of light that you see as visions during meditation. It can be a bright white light. The size of a pinpoint appears on the forehead at the space between the eyebrows.

The colors of the lights you visualize are different, and there can be flashes of light, fire-flies, moon, stars, sun, and charcoal. Yellow and white lights are common visions during meditation.

There is a combination of yellow and white light that people frequently visualize. In early days, it is the small balls of white light which floats about before the mind’s eye.

When you start observing such light, then you should know that your spiritual self is getting accustomed to meditation and you are immersing yourself into deep meditation. This happens when your concentration and focus increases in meditation.

After some months of your meditation journey, you will start observing that the size of light you visualize has started increasing.

In the beginning, these lights are not steady, and they flicker. They intermittently come and disappear from your vision. They flash out from the forehead and the sides. These lights cause a sensation of joy and happiness in your mind, and you start desperately wanting these visions in meditation to appear again.

However, you need to ensure that your desperation doesn’t lead to distraction of thoughts. You don’t need to force yourself to visualize.

With consistent practice of two to three hours in the morning or night, these visions during meditation start appearing frequently, and they start remaining steady for a long time.

The manifestation of light depicts that you are transforming your physical unconsciousness into consciousness. You are more aware of yourself when you start having such visions during meditation.

At this point, you should ensure that you are steady and are taking small breaths. Do not get distracted as you are getting closer to your spiritual self.

The Shape of Lights in Visions During Meditation and their Meanings

1. Triangle light in the face

If you are someone who is free from all the attachments in the universe, then you will have this vision during meditation.

This vision during meditation means that your needs are moderate, you have no ego and have lost interest in proving yourself to the society.

You are not attached to your success, and you don’t get affected by failure either. This vision means you have overcome all worldly things, endured heat and cold and witnessed happiness and sadness.

The person realizes that nothing matters. Outer things are influenced by external forces, and once you get closer to your spiritual self, you start detaching from such physical things.

Once you attain these qualities, you start getting triangle light visions during meditation.

You will come across a very bright and dazzling light as a vision during meditation. This light is called the light of Sushumna.

You will find it very difficult to concentrate on this light as it is powerful. You will be forced to withdraw your attention from it as your eyes will start straining.

However, you don’t have to fear this light as it is the light of graciousness.

Dazzling Light and What It Means

Later on, it will become static for 10 to 15 minutes or even half an hour if you have the strength to concentrate during meditation.

For people who concentrate between their eyebrows during meditation, the light appears on their forehead and for those who focus on the top of head; they see the light at the top of their head.

What to do when you experience the dazzling light?

The dazzling light will be so powerful that you will feel like withdrawing your meditation process. However, you need not worry about it. It depends on you. If you want to withdraw, you can, it is okay to withdraw if you feel like it.

However, you need to know that this vision in meditation is meaningful and a new experience in your meditation journey, which you should experience.

Breaking the practice will prove to be detrimental to your meditation journey. If you continue the practice, your mind will slowly get used to these visions during meditation.

How to concentrate for visions during meditation?

Although it depends on your taste, you should focus between the eyebrows for better results.

It is essential that once you start practicing by focusing between eyebrows, you should continue with that practice. It is necessary to be steady and concentrate on a single point during meditation.

Visions of Different Shapes During Meditation and their Meanings

During the early periods of meditation, you will see creatures that belong to the astral world. They will be very similar to human beings and have desires, cravings, love, and hatred like human beings.

They can move freely. These creatures have fine bodies and have powers of materialization; dematerialization, multiplying and visions of inferior order.

If you see a lustrous form of light, they are the higher deities who have appeared to bless you and encourage you in your meditation journey. You need to worship this lustrous form of deity as it will elevate your capacity to meditate.

Sometimes, you will also feel an invisible help from these deities. You will be tempted, and they have power to separate you from your body – consciousness.

However, you need to mark these things.

Don’t get immersed in these visions out of mere curiosity, they are just an encouragement and reassurance of metaphysical realities and the concept of transcendence. At this time, you will get to know more about yourself. You need to fix your goal and proceed with enthusiasm.

These lights have an aftertaste because whenever you go to sleep, these lights will reappear, their appearance will be a soothing experience.

Dazzling lights are also visualized when you are about to wake up, half asleep and half awake.

2. The manifestation of the sky as a vision during meditation

Sometimes, it may happen that you will visualize a sky or an open space during meditation. It’s imperative to know the meaning of this kind of vision during meditation. During this vision, you will find yourself as a black dot, and your form will appear in the center of light. You will see physical forms, human forms, and adult males, including some deity devotees.

Visions are often subjective and also manifest according to your mindset and events in your life. However, you will be able to get to a stage in your meditation practice where you will have pristine visions, and this will start happening when you get closer to your spiritual self.

You should also be careful in identifying visions. Also, do not misinterpret them. Common sense and interpretation skills are keys to finding meanings of vision during meditation.

3. Symbols you see as visions during meditation and their meanings

According to Sri Aurobindo, you will come across different kinds of symbols during meditation, and every symbol has a meaning and depicts higher reality, which can be divided as follows:

You may also visualize mountains or yourself crossing river and fighting enemies.
According to archaic devotees, this means that you are on the path of meditation where you will rise level by level and peak by peak.

Symbols that are highly pertinent to your spiritual self

Many times, it may happen that you will see an etheric space as a vision during meditation.
It is a symbol of all-pervading eternal Brahman, which is the concept of transcendence and ultimate reality.
The place you belong to or your cultural roots don’t matter. In any culture, this would be the same thing. The sun is the light and the divine Gnosis.

You may also come across alphabets or numbers as visions during meditation. They are also meaningful but have various interpretations due to different geometries.

Sometimes, a square may stand for super-mind. A triangle has a different interpretation. It can symbolize three lower planes or three higher planes.

These symbols may express many different ideas, but you need to use your interpretational skills for the same.

White/Violet – This color is for crown chakra. It connects us to source energy and takes us to intuition. Do not block it as it can cause anxiety, dissociation, and headache.

Blue – Blue is located in the throat, and it gets blocked when we are lying.

Green – This color portrays the heart. It allows you to love and feel loved.

Orange – This is for the sacral chakra which is for our sexual and creative energy.

Red – Red portrays the tailbone, which connects us to mother earth.
Visions during meditation are very natural, and they appear for the causes mentioned above.

You don’t need to worry about meditation visions and their meanings, but instead, live in the moment and experience the visions during meditation.

These visions can be in the form of light, shape or color. You need to identify these visions and interpret them according to the instructions in this article.

Moreover, the visions you see when you begin your meditation journey and thereafter will be different, it all depends on your level of concentration and how far you are in your spiritual path.