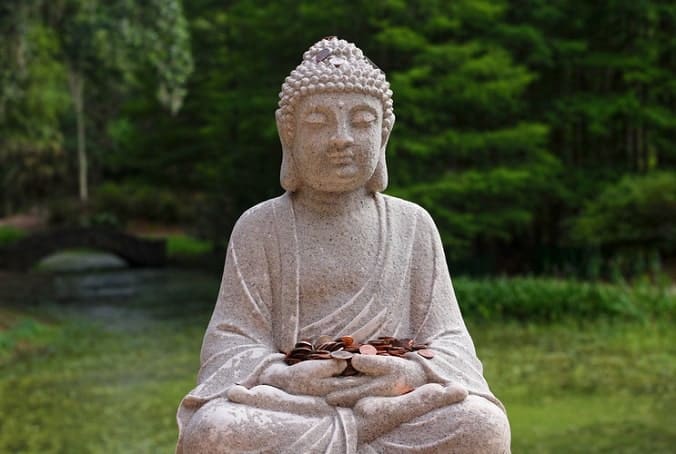 Zen delivers more meaning than you think. It isn’t just all about feeling relaxed and achieving peace — it is more than that.

Zen Buddhism isn’t just a concept that everyone can understand with their brain. It is a practice that requires lots of commitment, but it’s really worth it for your life.

Keep in mind that it isn’t an idea or a theory, it isn’t also all about religion or belief. It’s more like a practice that needs to be experienced.

84 Zen Buddhism Quotes That Will Help to Enlighten Your Mind

To help you understand what is Zen Buddhism, below we have provided some quotes that will allow you to see the good in Zen and Buddhism.

1. “The wise adapt themselves to circumstances, as water molds itself to the pitcher.” — Zen Saying

2. “Zen practice gets you out of your head and out working in the garden.” — Marty Rubin

5. “No snowflake ever falls in the wrong place.” — Zen Proverb

6. “A zen master’s life is one continuous mistake.” — Dogen

8. “Zen does not confuse spirituality with thinking about God while peeling potatoes. Zen spirituality is just to peel the potatoes.” — Alan Watts

11. “Zazen is an activity that is an extension of the universe. Zazen is not the life of an individual, it’s the universe that’s breathing.” — Dogen

12. “Well, for one thing, in the tradition of Zen that I’ve practiced, there is no prayerful worship and there is no affirmation of a deity.” — Leonard Cohen

13. “The practice of Zen is forgetting the self in the act of uniting with something.” — Koun Yamada

15. “In the dressing room, we’ve just made it really Zen: low lighting, lots of candles, and fresh, healthy food.” — Flume

17. “Harmonizing opposites by going back to their source is the distinctive quality of the Zen attitude, the Middle Way: embracing contradictions, making a synthesis of them, achieving balance.” — Taisen Deshimaru

18. “Zen teaches nothing; it merely enables us to wake up and become aware. It does not teach, it points.” — D.T. Suzuki

21. “Those who see worldly life as an obstacle to Dharma see no Dharma in everyday actions. They have not yet discovered that there are no everyday actions outside of Dharma.” — Dogen Zenji

22. “When you hear that all beings are Buddha, don’t fall into the error of thinking there’s more than one Buddha.” — Zen Graffiti

23. “Zen probably won’t solve a single one of our problems. What it might do is help us relate differently to what we consider problems.” — Barry Graham

24. “I stole this from Zen Master Suzuki Roshi: If it’s not paradoxical it’s not true!” — C.B. Murphy

25. “However, for human beings, practice is much too tiresome. We want to show our appreciation like sightseers, without doing it ourselves. Like spectator sports, which are very popular, the Zen fad is really a spectator Zen or Zen sightseeing fad.” — Kosho Uchiyama Roshi

29. “If you study the writings of the mystics, you will always find things in them that appear to be paradoxes, as in Zen, particularly.” — Alan Watts

32. “My look is either very baroque or very Zen – everything in between makes me itch.” — Iris Apfel

33. “To be in harmony with the oneness of life is to be without anxiety about imperfection.” — Zen Master Dogen

34. “Zen practice is to open up our small mind.” — Shunryu Suzuki

35. “The Zen expression “Kill the Buddha!” means to kill any concept of the Buddha as something apart from oneself.” — Peter Matthiessen

36. “A flower does not think of competing with the flower next to it. It just blooms.” — Zen Shin

37. “Inspiring others towards happiness brings you happiness.” — Zen Saying

38. “Well, for one thing, in the tradition of Zen that I’ve practiced, there is no prayerful worship and there is no affirmation of a deity.” — Leonard Cohen

39. “Zen is not a religion. There is only learning how to use your own mind and making it strong.” — Frederick Lenz

40. “There’s something Zen-like about the way I work – it’s like raking gravel in a Zen Buddhist garden.” — Chuck Close

41. “In a mind clear as still water, even the waves, breaking, are reflecting its light.” — Dogen Zenji

42. “Not thinking about anything is Zen. Once you know this, walking, sitting, or lying down, everything you do is Zen.” — Bodhidharma

43. “The truth knocks on the door and you say, “Go away, I’m looking for the truth,” and so it goes away. Puzzling.” — Robert M. Pirsig (Zen and the Art of Motorcycle Maintenance)

44. “Zen mind is not Zen mind. That is, if you are attached to Zen mind, then you have a problem, and your way is very narrow. Throwing away Zen mind is correct Zen mind”. — Seung Sahn

45. “Zen pretty much comes down to three things – everything changes; everything is connected; pay attention.” — Jane Hirshfield

48. “Be master of mind rather than mastered by mind.” — Zen Proverb

50. “It is not good to talk about Zen, because Zen is nothingness… If you talk about it, you are always lying, and if you don’t talk about it, no one knows it is there.” — Robert M. Pirsig

51. “No one is ever more him/herself than when they really laugh. Their defenses are down. It’s very Zen-like, that moment.” — George Carlin

53. “Whether you are a genius or an idiot, a thief or, like me, a Zen priest who has cultivated the mind for 30 years, the mind anyway is subject to conditions.” — Zoketsu Norman Fischer

55. “If you cannot find the truth right where you are, where else do you expect to find it?” — Dogen Zenji

56. “In Japanese art, space assumed a dominant role and its position was strengthened by Zen concepts.” — Stephen Gardiner

58. “Talking about Zen all the time is like looking for fish tracks in a dry riverbed.” — Wu-Tzu

59. “The truth of Zen, just a little bit of it is what turns one’s humdrum life, a life of monotonous, uninspiring commonplaceness, into one of art, full of genuine inner creativity.” — D.T Suzuki

60. “Unfettered at last, a traveling monk, I pass the old Zen barrier. Mine is a traceless stream-and-cloud life, Of these mountains, which shall be my home?” — Manan

61. “To escape from the world means that one’s mind is not concerned with the opinions of the world.” – Dogen Zenji

63. “Zen is a liberation from time. For if we open our eyes and see clearly, it becomes obvious that there is no other time than this instant, and that the past and the future are abstractions without any concrete reality.” — Alan Watts

65. “Zen is an especially intriguing school of Buddhism because it brings to mind paradoxical images of monks happily living quiet lives, meditating on mountaintops, as well as powerful martial artists.” — Benjamin W. Decker

66. “Zen teaches that if we can open up to the inevitability of our demise, we can begin to transform and lighten up about it.” — Allen Klein

67. “I have lived with several Zen masters — all of them cats.” — Eckhart Tolle

68. “But as long as you think you are practicing zazen for the sake of something, that is not true practice.” — Shunryu Suzuki

70. “To say one is revolutionary is a little like saying one is a Zen Buddhist – if you say you are, you probably aren’t.” — Lawrence Ferlinghetti

72. “The three elements of creativity are thus: loving, knowing, and doing – or heart, mind, and hands – or, as Zen Buddhist teaching has it; great faith, great question, and great courage.” — Eric Maisel

74. “If you want to travel the Way of Buddhas and Zen masters, then expect nothing, seek nothing, and grasp nothing.” — Dogen

75. “The way I meditate is by being organized. I can get real Zen if I go home and tidy the front room.” — Anthony Joshua

76. “The way of Zen is to become independent and strong. Don’t rely on others for perceptions of life and truth. Do it individually.” — Frederick Lenz

77. “When the student is ready, the teacher will appear.” — Zen Proverb

78. “My feeling or philosophy is closer to Taoism and Zen Buddhism, ’cause it’s the most practical.” — Harry Dean Stanton

79. “There are things that I value now that I didn’t when I first went over there, like Zen Buddhism, which has become part of my life over the last couple years.” — Matthew Sweet

80. “Still water has no mind to receive the image of the migrating geese.” — Zen Sayings

81. “Live the life in front of you, be the life you are, and see what you find out for yourself.” — Karen Maezen Miller

82. “Before I had studied Zen for thirty years, I saw mountains as mountains, and waters as waters.” — Ching-yuan

83. “I come to realize that mind is no other than mountains and rivers and the great wide earth, the sun and the moon and stars.” — Dogen Zenji

Defining Zen can be quite a challenge, but one thing is for sure: The practices of Zen Buddhism can significantly change your perspective in life, and I hope these  Zen Buddhism Quotes help you think clearer and merge with the universe in a deeper level.

2 thoughts on “84 Zen Buddhism Quotes: The Words of Wisdom for Everyone”